Who says hot strippers are just for rap videos and bachelor parties? Definitely not Rihanna. The new pop princess made her way to Florida and spent thousands of dollars in tips and multiple hours watching some of the hottest, most entertaining Miami strippers perform.

According to the source that dropped the leak, Rihanna said she wanted to get a feel for how exotic dancers moved to her music so she stopped by one of the popular Miami clubs in the early hours of a Sunday morning and made it rain. We’re not just talking a few dollar bills here; she apparently spent around $8,000 on tips for the girls.

Once she arrived for her educational excursion to study dance moves, she was so impressed with the performers that she stayed for nearly 3 hours. If they had bodies and moves good enough to keep Rihanna enamored, they must have been doing something right.

One of her favorite hot party stripper performances was reportedly by Remy Redd, one of the biggest (in all the best ways) strippers in Miami. She wasn’t the only one that caught Rihanna’s attention, though, as it took quite a few dances for Rihanna to drop the massive stacks of ones she brought in with her.

A few video clips started to make their way online showing Rihanna slipping dollar bills into the dancer’s outfits and making stacks of dollar bills rain on the girls. Rumors started to fly that one of RiRi’s best friends, Katy Perry, also showed up to the strip club for some early morning entertainment but Perry’s publicist later made a statement that she was in California at the time

Rihanna confirmed the trip to the King of Diamonds strip club where she had her fun with a Tweet to her massive fan base stating, “Lastnight one of my fantasies came to life! I got to see King of Diamonds strippers dance for me to the stripper song I made! #PoItTheF***Up. Wild for the night, f*** being polite!”

This wasn’t the first (or the last) time that Rihanna made her way to a strip club. A few days later she checked out the hot Atlanta strippers after performing a show at Philips Arena. Last year she famously tweeted that the best stress reliever a person can have is hot strippers. When they’re as sexy as the girls are in Florida it is hard to disagree.

It is also pretty safe to say that some of Rihanna’s songs like Pour It Up (which mentions raining dollar bills and strippers) may just have been written from experience. With the best Miami female strippers as hot as they are, though, can you really blame Rihanna for taking a trip to see the girls? 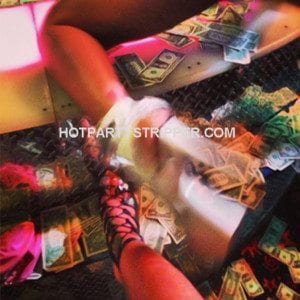 Miami, known for its laid-back atmosphere and amazing nightclubs is one of the world’s top destinations for unforgettable nightlife. Whether you’re looking for great food, great entertainment, the best places to dance or (obviously) some of the hottest strippers in the world, you can’t afford to miss Miami.

Having an unforgettable night with some of the hottest dancers and Miami female strippers doesn’t have to cost you $8000 or take place in a crowded club, though. You can have sexy, talented, highly-entertaining strippers for your private party or event and create your own, custom experience without being a pop superstar.

Using a service like HotPartyStripper.com allows you to not only choose from the hottest strippers available in Florida, you also have the ability to choose a stripper that fits your desires. Everyone is different and whether you are looking for strippers for a bachelor party for your best friend or for your own private bash, being able to take the time to choose an entertainer that is able to fulfill your requests is one of the most important aspects to having a good time.

While you may not be able to drop thousands of dollars in singles like Rihanna did, make sure you do spread some cash around for the entertainment; not only does this show the dancer you’re enjoying the show, it’s also pretty damn fun and there aren’t many better ways to create that true superstar feel than letting the bills shower down. Check out Rihanna tipping these Miami strippers.

If you want to take Rihanna’s advice and let go of your stress, do as RiRi did and hire a Miami stripper (or 2 or 3); it’s a great addition to any party and will surely give you and your guests an unforgettable show with rock star appeal.

So what are you waiting for? Head over to hotpartystripper.com and make your reservation for the sexiest strippers in Miami available today; you won’t regret it.